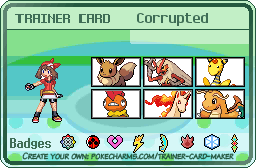 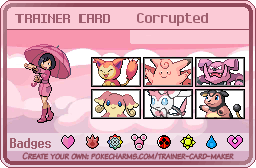 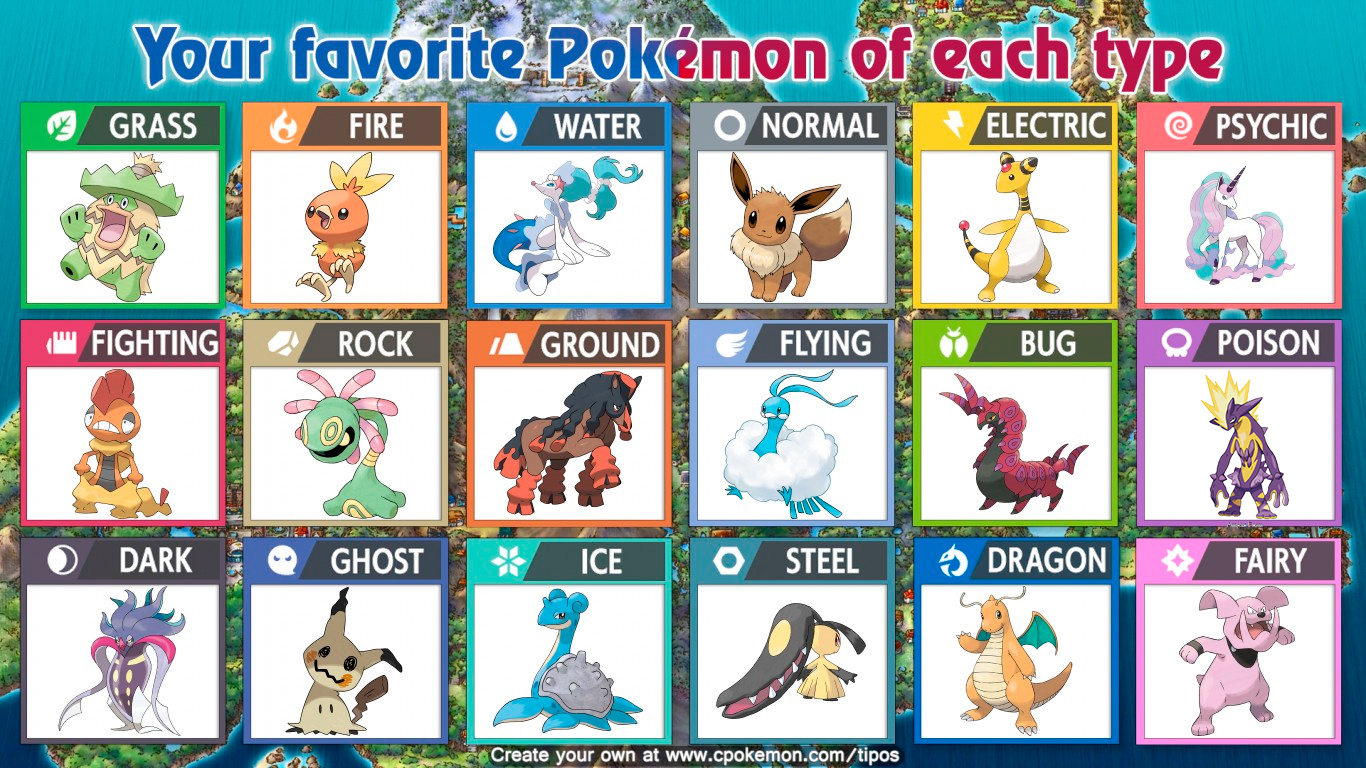 Pokemon is a battle monster RPG game series, which consists of advancing through a map or "region" while catching and training monsters you find on it, so they can fight for you. Said monsters are known for having elemental types and evolving, changing shape and stats.
Pokemon has always been one of my favourite games and media forms. What is not to love about raising your own creatures and watching them evolve thanks to your training and care?

Rambles about my favs

As with many, my love for Pokemon started watching the anime. I've watched mostly the first 1-3 seasons (Kanto, Orange Islands, Johto), and nowadays I do not care much for it unless an episode features a critter I love.
I've also been drawing Pokemon since I was a toddler, and maybe it's one of the things that made me "keep" my art hobby for longer than average, long enough to consider myself an artist.
I remember seeing family members and friends own the games, and I really wanted one as well. I wanted to be a "real" Pokemon Trainer, too. My lucky break got around Gen 3, with Pokémon Ruby and Sapphire. I instantly fell in love with this little fellow:

I always loved animals and a recent school trip made chicks my Favourite Animal of the Month. I felt like Torchic was "meant for me", like that special bond Ash and Pikachu have. Nowadays, Torchic is still my favourite starter of them all, and one of my closest favourite Pokemon.
As a very small child asking for her first expensive toy, my parents decided to buy me the whole thing in two parts: the cartridge first (Sapphire, because I Like Blue) and the console (GBA SP) next. There was quite a long gap between one thing and the other (or at least, long for a child), and I vividly remember reading the game manual and daydreaming about all the amazing adventures I would have with a little magic fire-breathing chick of my very own.
You can call me biased because of these nostalgic memories, and you would be right. That doesn't dull the fact that Hoenn, and thus Generation 3, are my very favourite, and the one most close to me.

Then came the first G1 remakes: FireRed and LeafGreen. I picked FireRed but in retrospective now I like LeafGreen (and Bulbasaur) better. Blaziken is to me what Charizard means to many, many Pokemon fans. Again, I had a second world full of elemental critters to explore and make friends with, and Kanto became another "homeworld" to me.

I also got the two GameCube games, XD and Colosseum, so I could have Gen 2/Johto Pokemon. They were quite different from the handheld games, both in tone, aesthetics, and game mechanics (double battles ahoy). They also reinforced my love for Eevee (In XD you get one as your starter! What's not to love?) and Colosseum made me fall in love with your starting pair: Espeon and Umbreon. Plus, "double battles, always" format allowed me to play this game along with my cousin, owning 3 Pokemon each on the same party. XD is my go-to game when I feel sick, because I am somehow able to complete that game in a week (what it takes for me to recover from sickness, most of the time).

With Gen 4/Sinnoh came discontentment. For some reason I didn't enjoy Diamond as much as my past games. It took longer for me to discover Platinum and make me fall in love with the region again.

And from here, I will say it: the abandoned mansion in Eterna Forest is way, WAY creepier than any Lavender Town. The music. The observing paintings/statues/TV. The human ghosts. And the fact that venturing oneself in that horrible place rewards you with one of the best, greatest Pokémon of them all...

The discontentment wouldn't stop with Johto, and SoulSilver. Everybody was in love with this game and its sibling HeartGold: Johto was back! With its two playable regions! And Pokemon would follow you on the overworld! The hype was too good to be real. When I played this game myself years later, I found myself scrounging every single blade of grass for ANY new Pokemon (Gen2), and my party was significantly underleveled by the way I got myself to the front doors of the Elite 4. And Kanto was nothing to toot about but a glorified boss rush spread across a mostly empty map. I am still not happy with this game, but I can understand why people loved the chance to reconnect with a world that meant to them what Hoenn and Kanto did for me.

Yet still, discontentment didn't stop in Gen5/Unova, especially because I was a frequent roamer of the Internet by then. I got into fights defending the new designs. Yet somehow, Gen5 was another "forgotten" generation to me - another game I had to buy second hand and rediscover.

Unova was weird. It had a much more "mature" tone, what with the angsty rival story, and the angsty villain with the single letter everybody falls for (but I find insufferable). Everything there felt more "real" too, somehow: the desert felt more desertical, the market felt market-ier, there were PLANES when I assumed everybody in that world just grabbed a giant bird to fly on. And yet, I powered through with my batch of weirdos, a team that incidentally felt as "edgy" as the game itself to match. With one sole exception that appeared while training for the Elite 4 and wouldn't let me skip over her:

Kalos was... something. The game flew over me too fast: my Pokemon's levels got WAY higher than any team member of any previous game and there were these weird human characters pantomiming some sort of story. I must say they had the best lineup for an Elite 4 of any game, tho, and the video-making sidegig was very fun.

The 6th generation brought along a remake of my beloved homeworld, Hoenn. It felt like a nice "coming back home". I miss the trumpets and gatheriing ashes to make flutes (how does that even work??), but it also brought along all the goodies of the new generation: specialized training, better improved features, and most importantly, the ability to pet your faithful battle monsters and feed them treats

What felt strange and weird about Kalos got worse in Alola, and to cap it all off it had the same "Where's the NEW Pokemon????" problem as SoulSilver. I did enjoy the tropical theme of this game, and the overall lightheartedness, but what mostly kept me pulling through and enjoying this adventure was the fact that I played it with my dearest partner in crime. In fact, a significant part of the Pokémon in my team are gifts of his.

Pokémon has been with me through many years of my life, but around 2019, I decided to settle down with these games, for I have a collection big enough for me to enjoy. Not that I don't like the new Pokémon! But I kinda wish the games were built with a little more care, like in the old times. Yes, yes, I am aware I am old, nostalgic and biased, and if you have a problem with that you can get out of me yard.

Rambles about my favs

This is the part where I tell you a little more on why I like some of the Pokémon I like!

Well, here's the answer: I love this Chalkzone-looking punk motherfucker because he's the perfect mixture of cool and silly, and I like cool mixed with something else better than just plain cool factor. Plus it was the first Pokémon I learned to use in competitive battle and it can kick dragon ass. I also love its rascally personality: just look at the animated sprites above! Look at little scraggly Scraggy constantly pulling its pants up only for them to fall down again and again! Look at Scrafty chewing gum! Finally, there's the implications its dual Dark/Fighting type gives, a mixture of heroic and villainous that gives the mind something to munch on for a while. 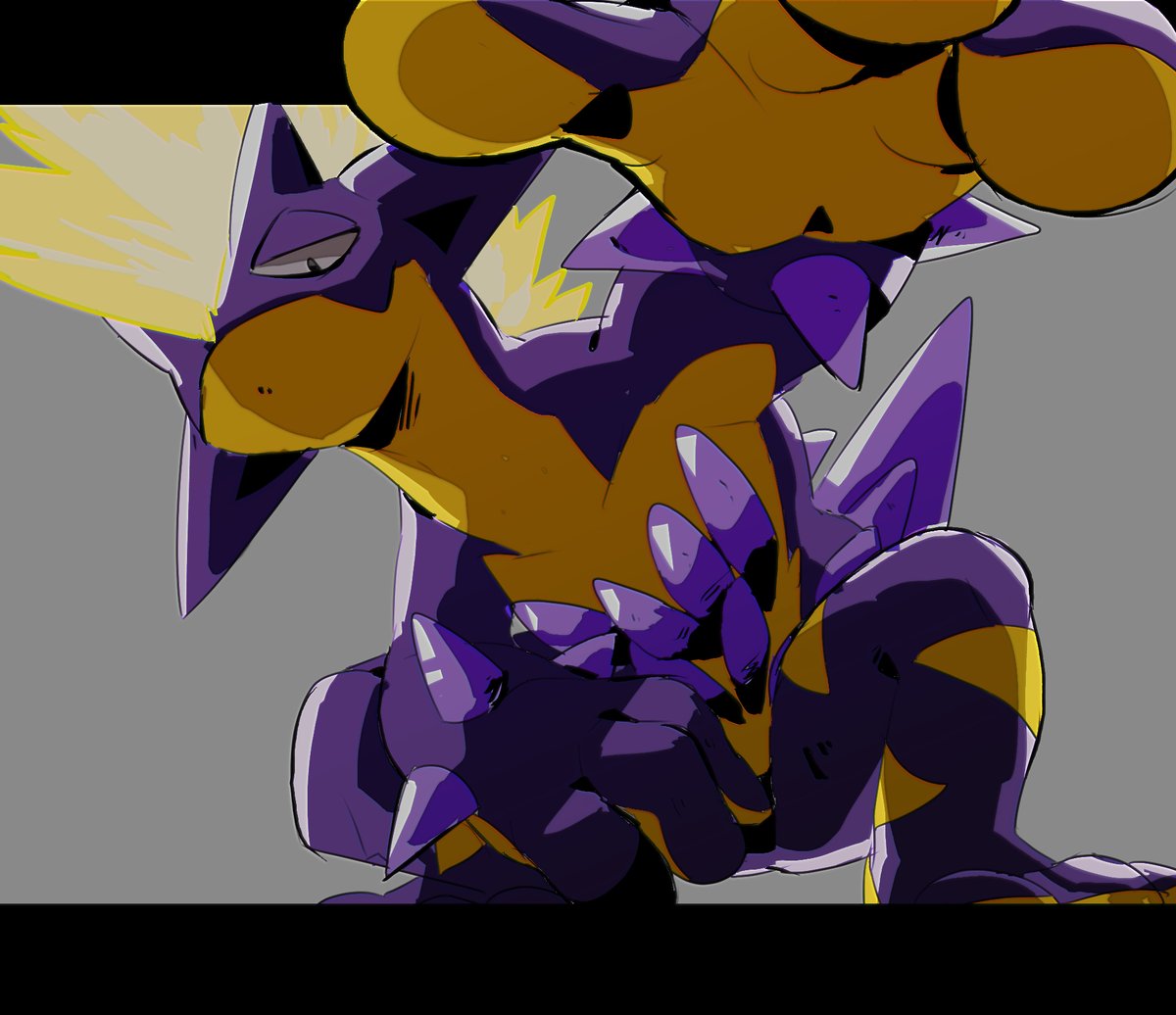 At the time of writing this, I haven't touched Pokémon Sword and Shield in my life, but hear this: if Scrafty didn't exist, Toxtricity would probably be my favourite Pokémon instead.

Similar to Scrafty, it's another punk-inspired Pokémon with a new (at the time) and fascinating type combo. However, what makes Toxtricity stand out is a stronger electric guitar theme (it can strum the thingies on its chest to make music!) and its context in-game: you're given an egg of its preevolution, Toxel (and receiving a Pokémon like this always makes it extra special) and it can evolve into one of two rad different forms depending on its nature. Toxtricity was made to stand out, and that's something I appreciate.

Nowadays, Pokemon is a distant interest of mine, for now I am more focused on other things I love. I do have or had "projects" surrounding them, like self-imposed objectives. Here is a list of them to keep track.

Playing Through Each Generation Project: The one I described above: getting one game from each generation, playing it whole. Stopped around Gen 8 because I didn't like the "Dexit" and I'm not willing to pay +50% of the price of a past game for less content. Still, I am considering this one "complete" for now... maybe I'll keep the adventure going if I find Sword/Shield for cheap. Speaking of which, that upcoming Gen 9 looks promising...

Living Dex project: you know, all the Pokemon, boxes full of them rearranged by order. I pooled lots of hours trading on Alpha Sapphire on the Global Trade System and training Pokemon on the Blissey Secret Bases so I could catch them all.

Eternal Holiday project: As you have seen, I've got many cartridges of old games, and they were able to transfer Pokemon to the next generation until GameFreak decided to stop that thing with Sword and Shield (bad Gamefreak, bad!). Not a problem to me, tho - the Alolan Bean Isles make a perfect paradise for my Pokemon to enjoy their retirement from adventure.

Ribbon Champion project: With the same "transfer-forward" system I described before, it is possible for a Pokemon to obtain as many ribbons as they can from each game. My Pokemon of choice is a Mawile named Audrey, but this project is on hold because the Battle Tower (Emerald) keeps kicking my ass.

Mew on Gen5 project: According to this video, it is entirely possible to own a Mew without special events by filling the maximum amount of Pokémon possible on Pokémon Ranch, a now retired app thingy for the Wii. Well, guess who's got that app thingy... and not as much time on her hands as she wished to do this.

Finally, this is not necessarily another project, but with the power of technology and unicorn magic, I plan to make a gateway for my Pokémon to have a second home on the Internet.
In other words, I'm trying to recreate my favourites on GPX+. Click on them, hatch them, feed them, you know the drill.
Oh, and make sure to read the descriptions I write for them from time to time: they're mostly my thoughts and memories on those specific Pokemon species.

Background and many sprites are from Shane's Pokemon Domain, a precious time capsule of Pokemon anticipating the upcoming Gold and Silver. Shane, wherever you are now, know that you've got great taste.

Some more GIFs were obtained from CyberneticDryad (cool name btw)

Pokemon animated sprites are from this section in the Pokencyclopedia, and the 3D Models are from Project Pokemon