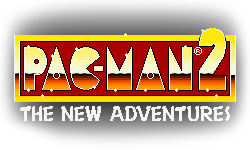 Pac-Man 2: The New Adventures is an odd little game for the SNES and the Sega Genesis.
Don't let the "2" on the title fool you, this is not a direct sequel to the pellet-chomping, ghost-chasing maze action from the arcades, but more of a Hey you, Pikachu!/Pokémon Channel spin-off instead. In this game, Pac-Man and his family live in a small town, and instead of directly controlling him, you help him achieve his goals by making him

and using a slingshot.


This video here was my first experience with Pac-Man 2. Despite the frustrations of the player here, I found it a game worth trying out for its quirky gameplay and cartoony humor. 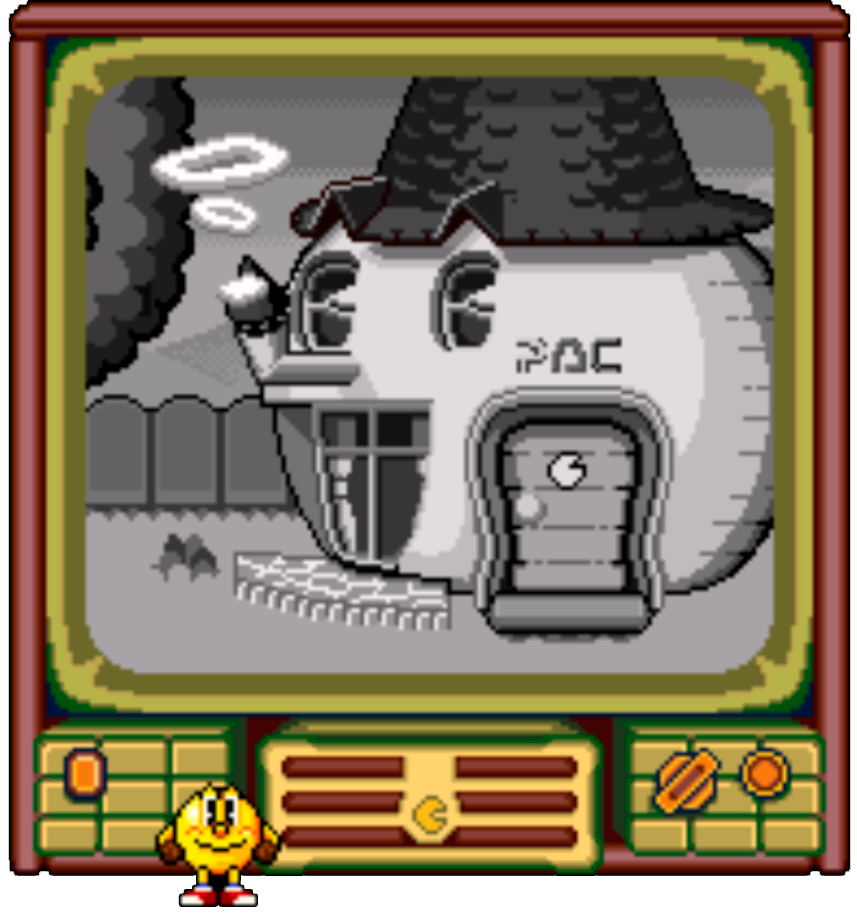 Pac-Man 2 has a very "Saturday Morning Cartoon" aesthetic. The game begins with Pac-Man taking you inside a TV showing his house to introduce you to the tutorial, the intro presents the main characters framed inside color rings very similar to those of Looney Tunes, and Pac-Man himself can get in lots of funny slapstick shenanigans while playing the game. I really like games that partake in this sort of aesthetic and try them out for inspiration for my projects.

The main gameplay, aside from the

and slingshot with which you interact with Pac-Man and his world, relies heavily on Pac-Man's emotions: he will react and act differently to the same situation according to his mood. For example, an angry Pac-Man is more impulsive and tries to brute force his way through things; while a scared Pac-Man will walk more slowly and refuse to do things that may look risky or dangerous.

The game has four "missions" that succeed in a linear manner: the first three ones ask you to help Pac-Man retrieve a specific object and introduce you to a new scenario, while the last one requires you to fight the ghosts in every previous scenario and find a secret new one to fight a final boss. There are also paragliding and minecart sections to shake things up from time to time.

With this said, the mechanics are unlike many games, and it can be very frustrating to play this game the way intended. I personally treat this game less like a videogame to be beaten and more like a "toybox" - I often like to whip out the game just to have Pac-Man around and see him get into shenanigans, with or without my help. I find it fun to just experiment with his moods, obstacles and situations and see what comes out of it. The game itself encourages this, with its many, many animations, quirks and secrets. 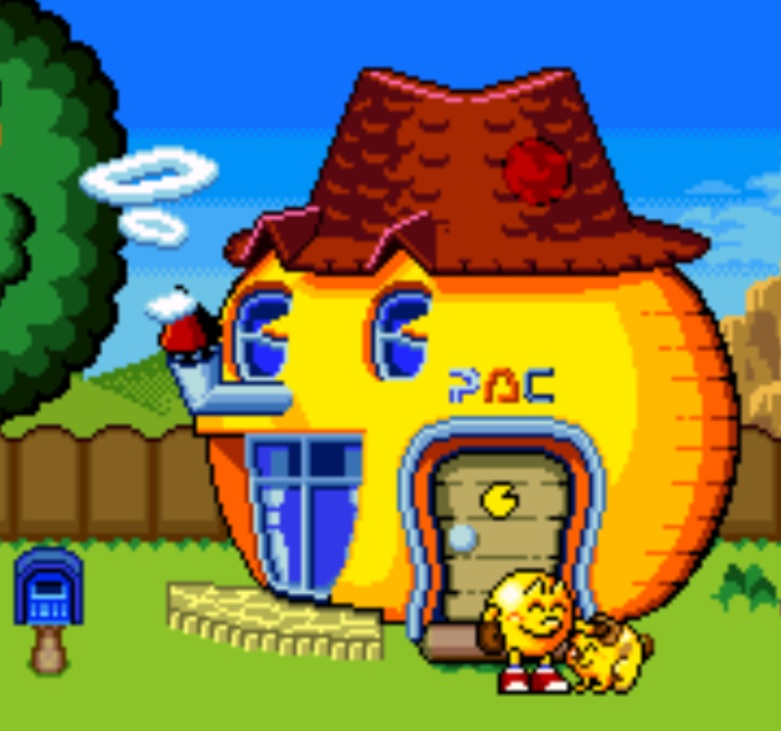 Also, strangely, I find this game can be used as an allegory for mental health. Like, it shows how situations can be played out depending on one's mood, and how important it is to keep said mood in check. I often find myself saying things like "yeah that really messed you up let's wash your face/pet your puppy/eat an apple" while playing, and I'd like to think small kind actions towards the self can help make things better, regardless of the circumstances.

Overall, I find this unusual sweet little game to be incredibly charming and full of life. I find it often disregarded for its misleading title and unusual mechanics, but I find it to be a quite unique experiment, and with its lively world and rich system of emotions, animations and secrets, I think this one's a little gem.

If you like what you read so far and are interested in giving this game a go, I recommend you to get yourself an emulator & ROM or play it directly online. If you're not too fond of emulation, there's a Virtual Console port available, but it's for the Wii U. I'd love it for this game to be more easily available "legally", but unless you've got a bonafide SNES or Genesis and like to dig in the retro console market, maybe this is the best option available for you at the moment.

By the way, I recommend the SNES version over the Genesis because it's got a more lively soundtrack and I cannot deprive you of Pac-Man's wonderfully warbly voice.

Since this game has mechanics that are a bit different from other games, I've put together this brief list of tips & tricks that might not have been clarified by the game's own tutorial

The good thing of a password system is, I can help you access all scenarios without needing to unlock them yourself! No need to fiddle with save states, either! (unless you're trying to beat the minecart/paraglide levels, you'll need them)
All these passwords are either generated by me or taken from other online sources and tested by myself for veracity:

As a little web extra, I've created these GIFs showcasing Pac-Man's moods and animations (this isn't even all of them!). You can use them as webpage decorations, mood indicators, and anything you might come up with. All I'm asking is to right click + save them instead of hotlinking to them.

By the way, the sprites were ripped by Kevin H., all I did was to put the frames together and compile them into animations.

Apart from the attributions given through this shrine, there are a few more I should mention:

The little ghost you see here used as a bullet point is from Rozgrywki's Free Games Online (check them out!)