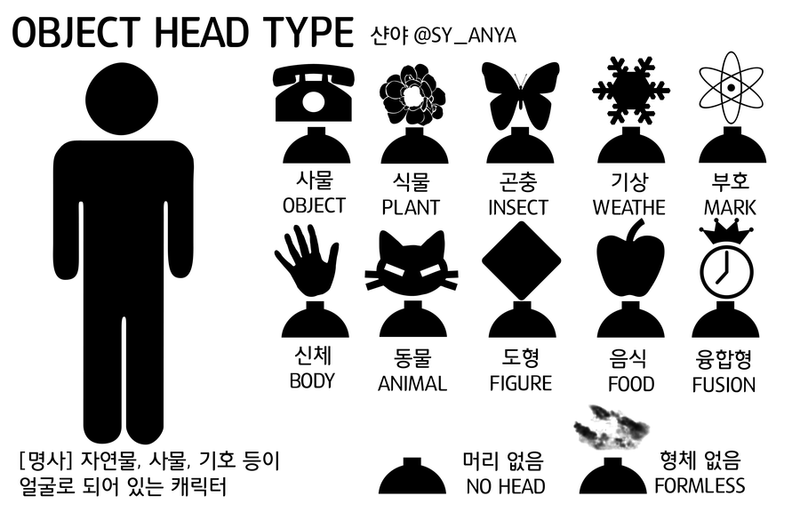 An object-head is a fictional character who has a (most of the time, humanoid) body and, as the name says, an object where their head should be. This is a fairly straightforward way of anthropomorphizing objects, and one I find an incredible appeal to.

Personally, I find object-heads a base concept that leads itself to endless possibilities of characterization and interpretation. I think they are inherently visually striking designs, as well as being able to hold an enourmous amount of symbolism. The natural and the unnatural. The living and the inert (Not undead. Undead were alive. Inert was never alive in the first place). The tool and its creator.

While you don't need much more thought than to put a common household object on somebody's head to have a silly little character, just like you can do the same with an animal, I do see object-heads as an embodiment of the relationship we, as humans, have with the tools we create. We make objects to help us with our daily tasks and enrich our lives, yet we discard them as soon as they stop being useful to us. And unfortunately, we do the same with eachother, too. Think about how companies mass-produce products with no regards of where will they end up, or how they hire people to make their goals come true yet treat them horribly.

I believe that nowadays, people have a difficult relationship with the objects they surround themselves with. The "garbage" we mindlessly throw away. Not knowing how to repair (or not being allowed to repair!) the things that have helped us or enriched us, and thus not being able to "help" them back. Accumulating more and more objects, without cherishing them or giving them the use they were meant for, just for the sake of "having more" or fulfilling an artificial need for completeness. Determining value based on usefulness, be it an object, a plant, an animal or a person.

Perhaps, much how anthropomorphic depictions of animals helped people see them as sentient beings, anthropomorphizing objects could be a step towards the right direction to help people heal their relationship with objects and eachother.

Note: these are mostly for me, to know what I like and what I don't and to keep it in mind for future designs. You can design your object-head however you damn please. Object-heads (and their close relatives, living objects!) are part of Japanese folklore! Tsukumogami are tools that have acquired a spirit after more than one hundred years of service, becoming sentient and sapient in the process, and even desiring to harm people if abandoned or treated badly.
Karakasa, the one-eyed umbrella, is one of the most famous Tsukumogami, but they can also take more anthropomorphic (or even animalistic!) forms as depicted above.

I learned about this wonderful category of mythological creatures through this post on Bogleech's blog. While I admit I took some inspiration from the myth to design my object-heads, I do not want to straight up call them tsukumogami. That would be like me making a regular ass fox furry and calling it a "kitsune". I am very happy object-heads have a mythological basis and can be considered proper "fantastical creatures", tho!

The Pac-Men from Kylie Minogue's "Better Than Today"

These snazzy, smart-dressed Pac-man heads are the very first object-heads I saw in my life that left an impact on me. Their lively presence playing instruments for Kylie Minogue and the videogame visuals of the music video made it very memorable, and it's partly thanks to them! They also made me correlate object-heads with music video settings, and everything surreal, trippy and fantastic. If you know a few things about object-heads, you know TV-heads (or monitors, or screens in general) are the most popular choice. They're pretty much to the object-head fandom what foxes are for furries. Ever so iconic, I think the first "official" TV-head I've ever seen is this quaint little fellow. Living in a land of discarded CRT TVs and a faded rainbow, it feels like he makes his home in an embodiment of bittersweet nostalgia: the good ol' times are over, but he keeps on smiling, dancing and replaying those great times on his face.
Bet whoever was making this at Ubisoft didn't expect such a take on this stage, huh. 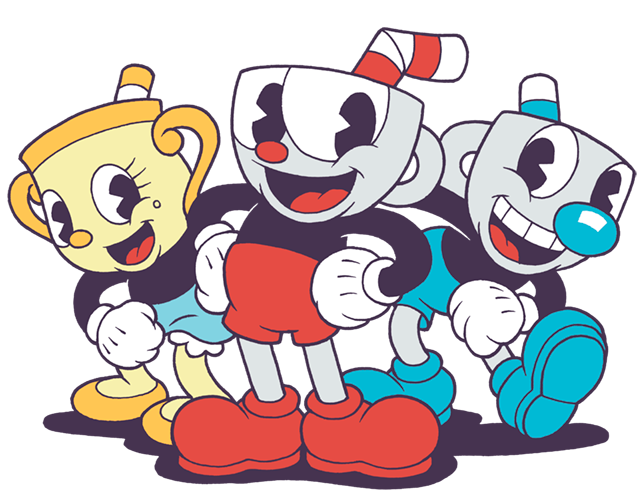 One of the most popular "mainstream" medias with object heads nowadays is Cuphead, an absolute masterpiece of traditional animation in videogame form that features two (and later, three) object-heads as playable characters as well as some NPCs and villains.

This game combines so many things I love. Not only object-heads are prominent characters, but the whole game feels like an actual cartoon from the era of Silly Symphonies and Betty Boop, a cartoon you can play. I can't stop but admire all the creativity and hard work that went making such a crazy idea into reality, and to this day, Cuphead is one of the things that brings me the most joy knowing that it just... exists. It's a great inspiration for me, in so many ways.


A strange cartoon with strange origins: the first collaboration between Warner Bros and Disney since Roger Rabbit, can you imagine that? Fun trivia aside, I think this is one of the few cartoons to star almost entirely object-heads (Dog works like the others, so he can be an honorary object-head), and while I mostly watched it through the Internet, I managed to catch it a few times on TV. A magical moment, I tell you.

To know what Right Now Kapow is all about, the intro more or less tells you: it's a series of skits performed by these six characters, each one with different roles, personalities and even body types (the advantage of being a cartoon object-head!) with every new skit. With a penchant for sarcastic meta humor (you know, the kind that makes fun of classic narrative conventions and tropes) and for being completely bizarre and sometimes stupid, Kapow's humor might not always be my thing, but it is always guaranteed to surprise you at least once per episode.

Two other things I love from Kapow, apart from its characters and surprising skits, are its beautifully trippy transitions that remind me of MTV so much, and the fact that the artstyle is a bit rough and imperfect. Lines aren't always perfectly straight, and you can see animation goof-ups if you look a bit closer, but I don't think less of this show because of it, not at all. For me it means that imperfection can also form part of "professional" things, and that eases my anxiety about getting everything perfect when I make art. Gaze into Diamond's eyes and you'll see what I mean. They are a bit squiggly, and irregularly shaped, yet it's part of what makes her loveable.

This singing show has lots and lots of funny object-head costumes across all countries! Here are just a few of my favourites.
Pictures are mostly taken from the Masked Singer Wiki.